We awoke excited for our first day of travel!  We got started about an hour late, but that's pretty average for me, (unless I'm working of course)!  We packed all of our camping gear, food, suitcases ...
L
W

We awoke excited for our first day of travel!  We got started about an hour late, but that’s pretty average for me, (unless I’m working of course)!  We packed all of our camping gear, food, suitcases and camera gear into the car, kissed the kitty’s goodbye and headed on up highway 35.  The weather started out fairly calm with a little sun, but the closer we got to Duluth, the denser the fog became.  Right around the Duluth area the fog was so thick that we could barely see the car in front of us!  I happen to have a love for spooky fog, so I was still excited and not at all concerned.  After 3 hours of driving we made it to our first destination and State Park: Gooseberry Falls State Park.  It wasn’t quite as foggy here but slightly chilly for the 30th of May.  We hiked 2.2 miles.  As we made our way up into the moss covered hills and birch trees that were just beginning to flash us with their bright baby green leaves, Tim began to go all bird crazy on me and started pointing out all of the different warblers.  We saw, Black Burnian, Black Throated Green Warbler, Black & White, Chestnut Sided Warbler, Palm & Nashville Warblers as well as Redstarts and Mergansers.  It was a bird lovers haven!  And Goosebery Falls was the first of many, many waterfalls that we would see along our tour. 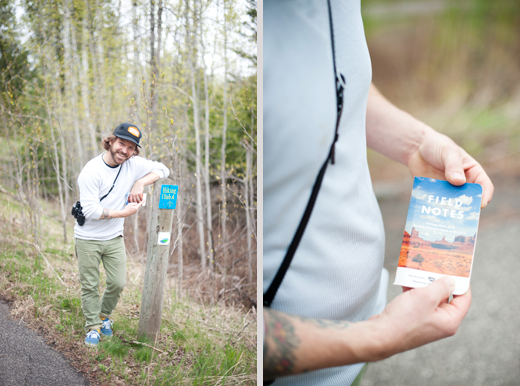 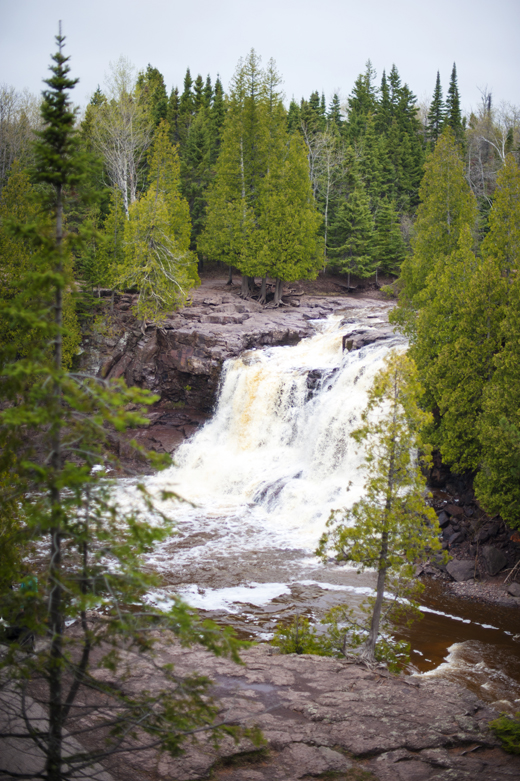 Tim!  Get away from there!

Then we headed just a little further up the North Shore to Split Rock Lighthouse State Park.  The fog was heavier here, as we were right on the water and the sky was looking like it wanted to rain.  So, just in case, we donned our rain jackets and our brand spanking new rain pants!  It would only be a short while before I would realize how much I would fall in love with my rain pants, the best camping/hiking trip investment!    The Split Rock trail was populated again with birch trees and was half wooded paths and half paved bike trail.  Unfortunately about halfway through our hike it began to rain and then pour.  Of course this was the longest of all of the trails that we would be hiking, 5.8 miles!  However, we had our rain gear on, so we kept tromping through the rain and soggy grounds.  We stopped at one point when Tim realized that his rain jacket was not an official rain jacket and he was getting wet.  We stood under some trees, enshrouded by fog, and watched and waited as large rain drops plopped onto our jacket hoods through the trees.  Nothing changed, it was still raining… So we went back out into the thick of it and kept going.  Most of the time my hood was half way over my face so I couldn’t see anything, just a bunch of green grass and trees swooshing by me.  As the trail edged closer to the lake again, we came to a giant winding staircase that scaled the side of what looked liked a giant boulder.  It was not a mountain and not a hill, just a ginormous boulder that was formed during the glacier movement.  When we got to the top of the staircase, that was more like a ladder in some spots, we would have had an amazing view of the lake had it not been for the fact that we were surrounded by thick, white fog.  It was slightly disappointing, yet it felt very mysterious, like we were in the middle of an episode of Sherlock Holmes (the PBS version, not the Robert Downey Jr. version). 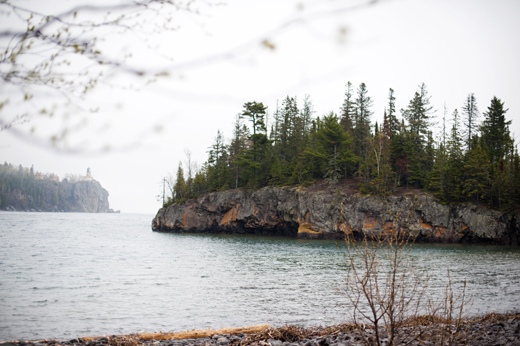 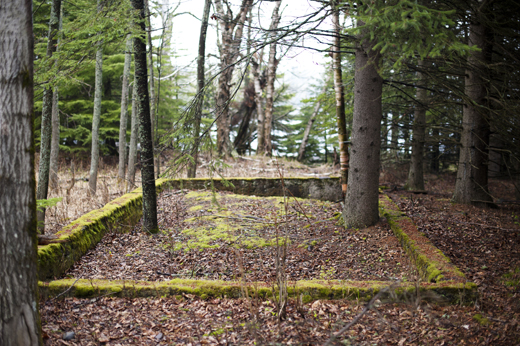 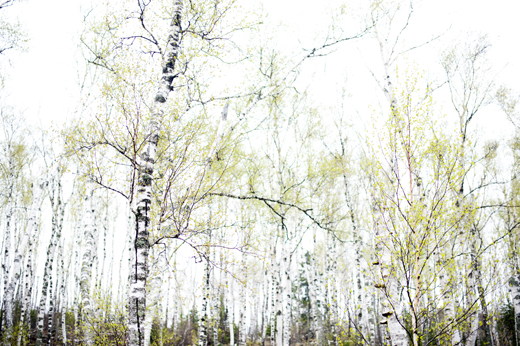 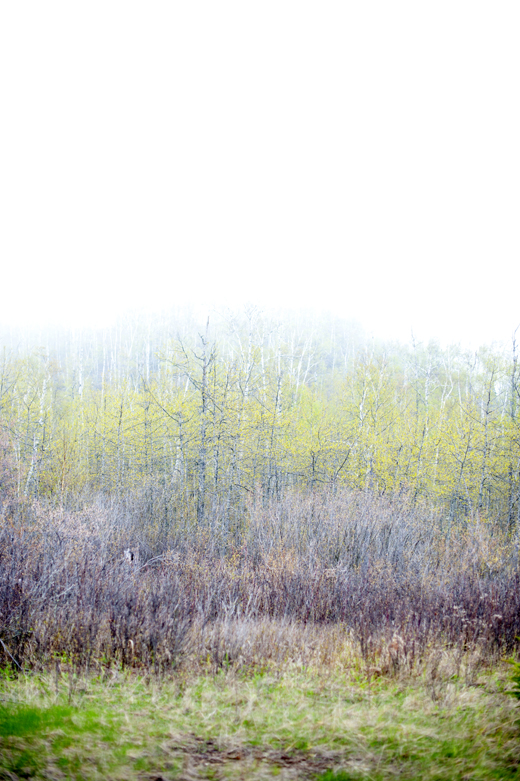 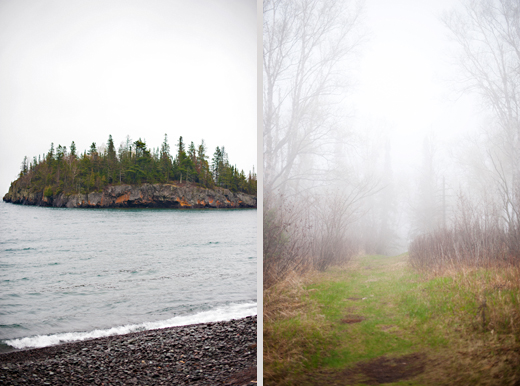 When we returned to our car, I realized that the upper half of my body was soaking wet.  The rain had seeped through my rain jacket, corduroy jacket, shirt, tank-top and even dampened my bra!  However, my pants were nice and dry.  Rain pants you rock!  Of course at this time, the sun popped out and rewarded us with her warmth and clear blue skies.  It would have been nice had this happened slightly earlier, but that’s the way things go.

After some water, a snack and drying our clothes on top of the car, we headed even further up the North Shore to Tettegouche State Park.  We quickly set up our tent before the rains came again, put the rain pants back on and now my winter coat (Yup!  It was getting chilly and my other jackets were wet) and hiked the Tettegouche trail, which was only 2 miles.  The fog had rolled in, yet again, but it allowed me to continue on my mysterious journey with Sherlock Holmes.  This trail had more pine trees and several board walks and smelled like a giant Christmas Tree.  The “spectacular overlooks at Shovel Point” were, however, very foggy when we made it to them and were only slightly spectacular.  In a mysterious way of course!  (Please note, I’m very sarcastic and I was still very satisfied with everything)! 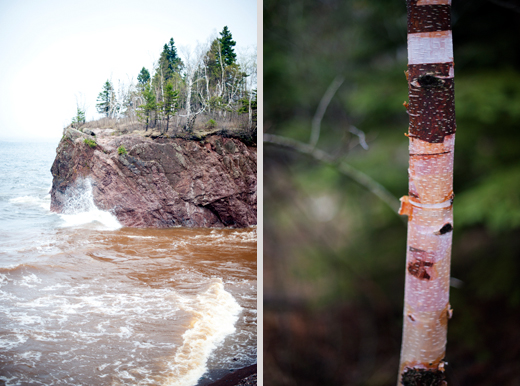 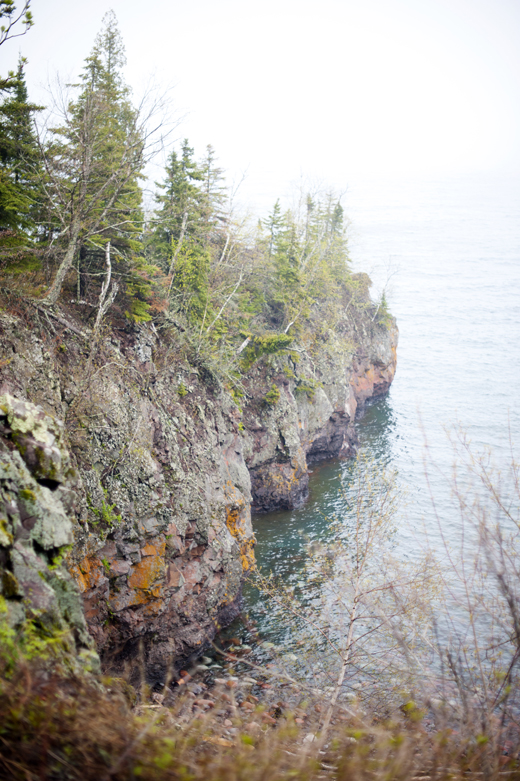 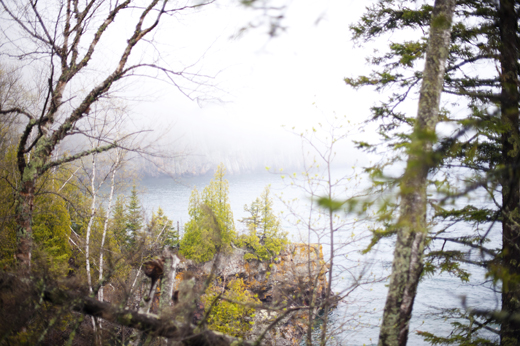 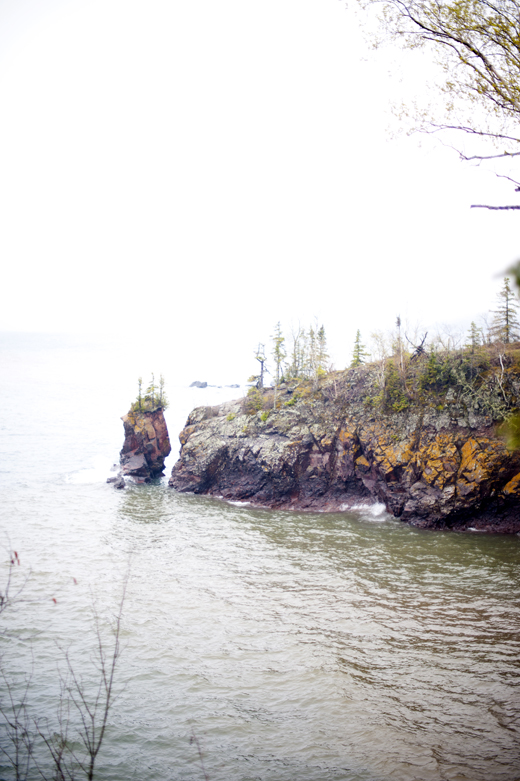 The rock on the left used to be part of an arch, but is now a “stack” as the arch fell away a few years ago. 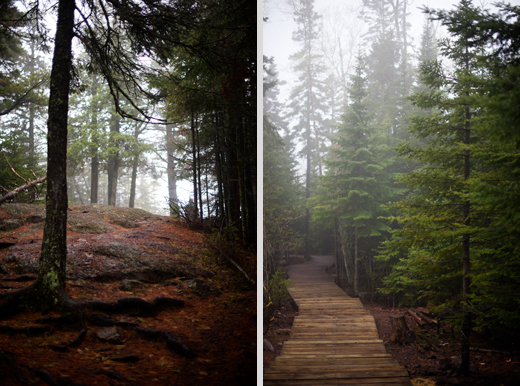 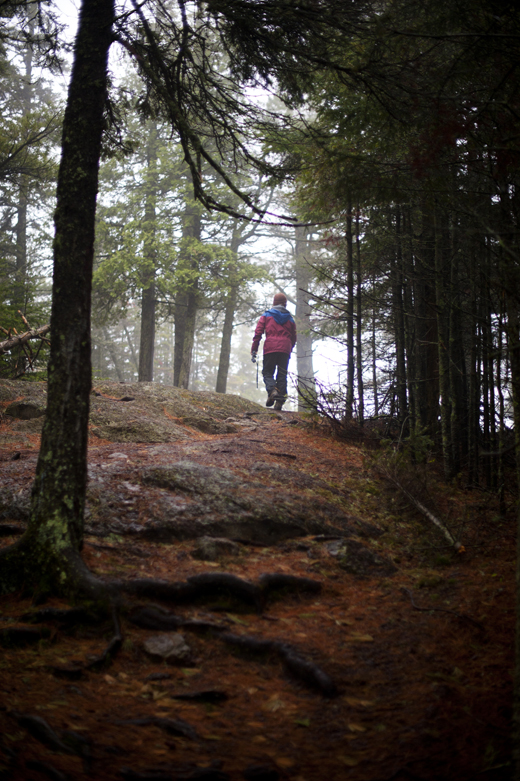 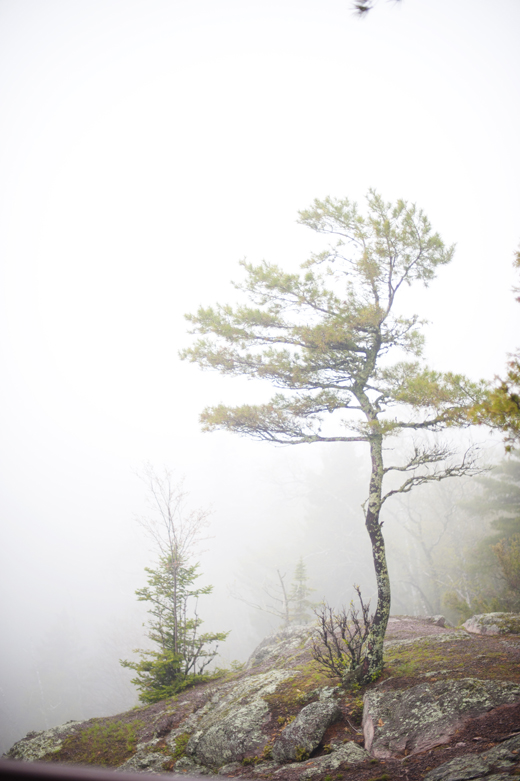 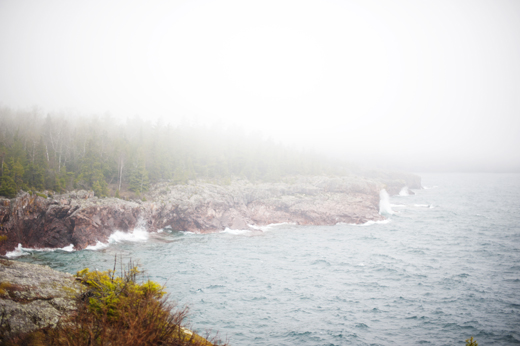 Around 9:00 pm at night, after hiking a total of 10 miles, we rewarded ourselves with potato soup over the fire and a delicious bottle of Eiswein!  This stuff is absolutely amazing!  The nectar of the Gods!  No need for stemware, we just drank it from the bottle!  Then we snuggled into our sleeping bags and tried to fall asleep.  Well, I tried, Tim always just hits the pillow and he’s out (this is slightly annoying to me).  I ended up laying there for a while, listening to the sounds outside of the tent, wondering if they were animal and if so, how large were they.  Sherlock where are you?  Then the pitter patter of the rain began and I drifted away. 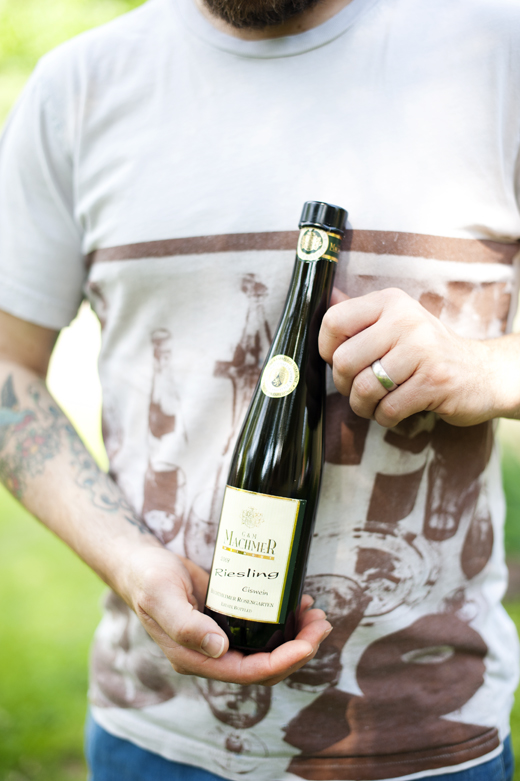 oh, wow! such amazing photos! can’t wait to see more. i hope we can follow in your footsteps/tire-tracks and do the superior circle tour someday, too. :)