In the morning we had a delicious breakfast of coffee, fruit and Finnish pancakes, made by Hubert and Jacomyn.  We chatted some more, and I ran about, photographing all the little details of their hom...
L
I

In the morning we had a delicious breakfast of coffee, fruit and Finnish pancakes, made by Hubert and Jacomyn.  We chatted some more, and I ran about, photographing all the little details of their home.  We would love to revisit! 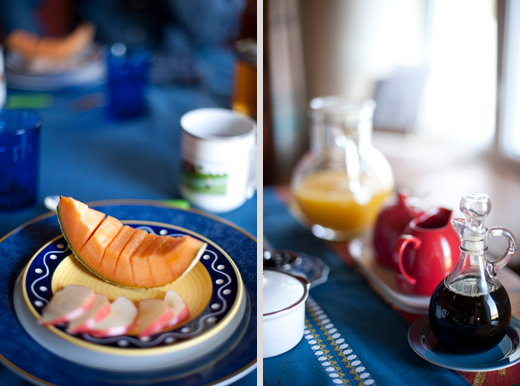 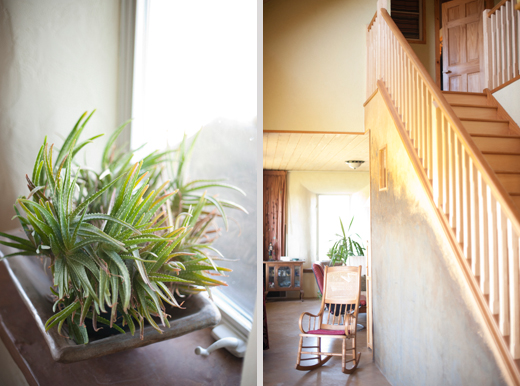 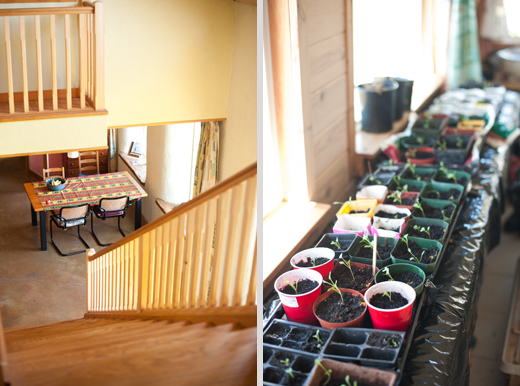 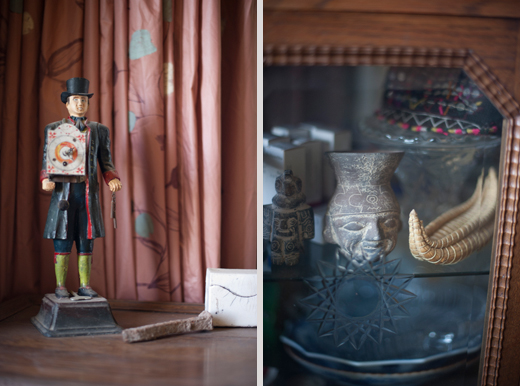 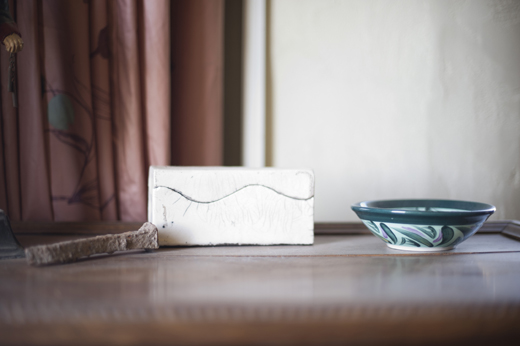 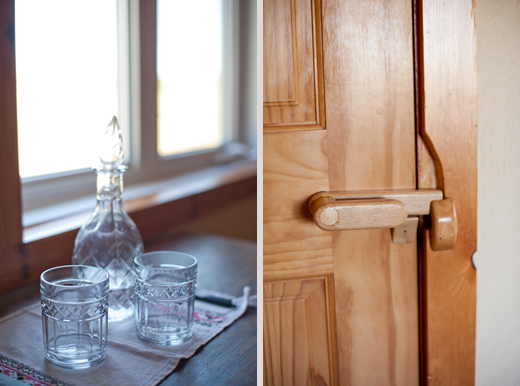 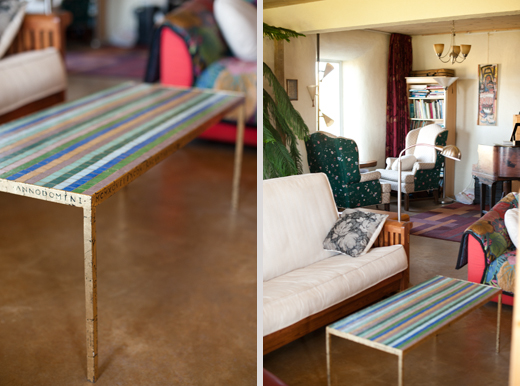 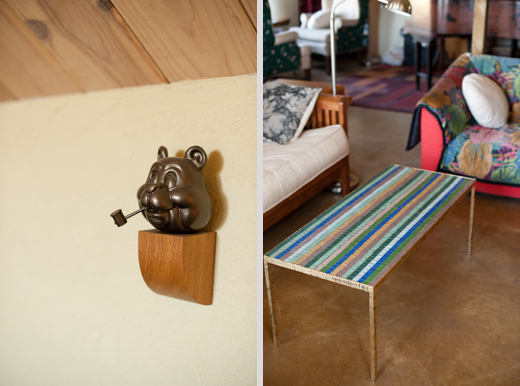 Our next stop was, Sleeping Giant Provincial Park, but we first had to stop for a view of the “Sleeping Giant” himself. 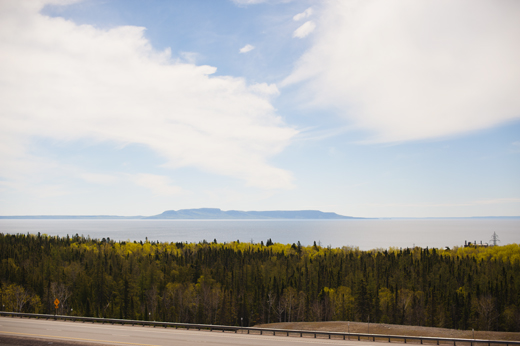 A great tribe of Ojibways lived outside Thunder Bay on Isle Royale. Because of loyalty to their gods and their industrious and peaceful mode of living, Nanna Bijou, the Spirit of the Deep Sea Water, decided to reward the tribe.

The Great Spirit told the chief about the tunnel that led to the center of a rich silver mine. He warned that if the Ojibway tribe were ever to tell the White Man of this mine he, Nanna Bijou, would be turned to stone. The Ojibways soon became famous for their beautiful silver ornaments. The Sioux warriors, upon seeing the silver on their wounded enemies, strove to wrest the secret from the Ojibways.

Torture and death failed to make the gallant Ojibway tribesmen divulge their secret. Sioux chieftains summoned their most cunning scout and ordered him to enter the Ojibway camp disguised as one of them. The scout soon learned the whereabouts of the mine.

One night he made his way to it and took several large pieces of the precious metal. During his return to the Sioux camp, the scout stopped at a White Trader’s post for food. There, without furs to trade, he used a piece of the stolen silver. Two White Men, intent upon finding the source of the silver, filled the scout with firewater and persuaded him to lead them to the mine. Just as they were in sight of “Silver Islet”, a terrific storm broke over the Cape. The White Men were drowned and the Sioux scout was found drifting in his canoe in a crazed condition.

A most extraordinary thing happened during the storm. Where once was a wide opening to the bay, now lay what appeared to be a great sleeping figure of a man. The Great Spirit’s warning had come true and he had been turned to stone.

Today, partly submerged shaft to what was once the richest silver mine in the northwest, can still be seen. White Men have repeatedly attempted to pump out the water that floods in from Lake Superior, but their efforts have been in vain. Is it still under the curse of Nanna Bijou, Spirit of the Deep Sea Water? Perhaps…who can tell?  Firstpeople.us

As we drove onto the Islet, out came the wildlife!  We must have seen 10 – 15 deer, a grouse, a grey wolf ran into the road in front of us, only to be startled and ran back into the brush and then a black bear ran out in front of us, startled as well.  We mainly saw these last two animals backsides as they ran away from us, so no photos.  Only this little “Button Buck”, as Tim called him, would hold still for me. 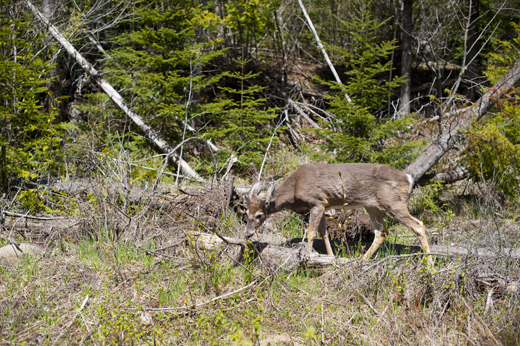 We stopped and walked a couple of miles out to the “Sea Lion”.  Unfortunately, the lion has lost it’s head now and all you see are it’s front legs and back haunches.  If you think of the arch area as it’s belly, you can imagine where it’s head would be. 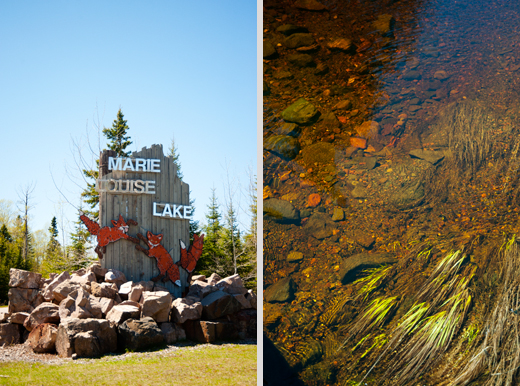 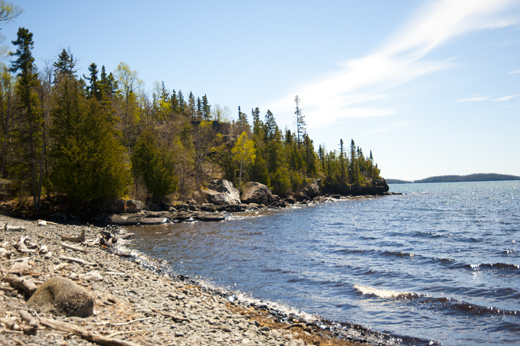 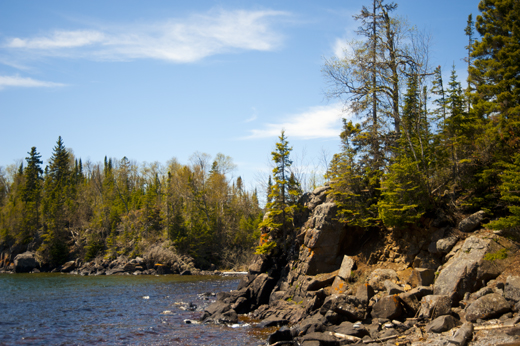 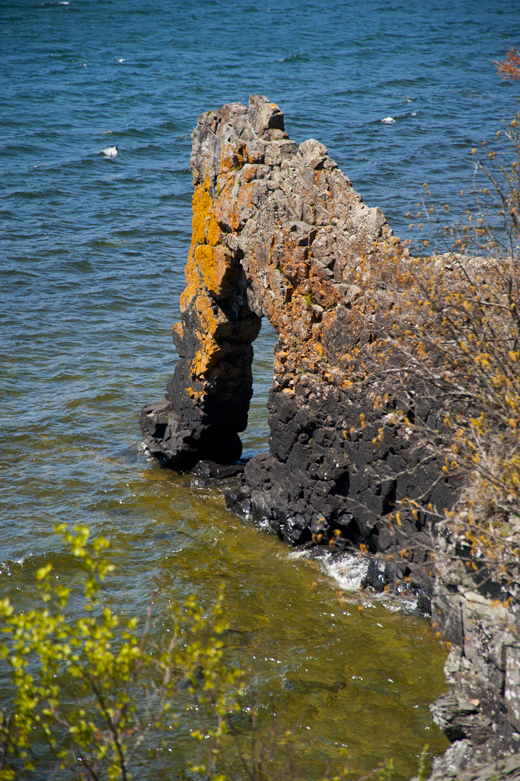 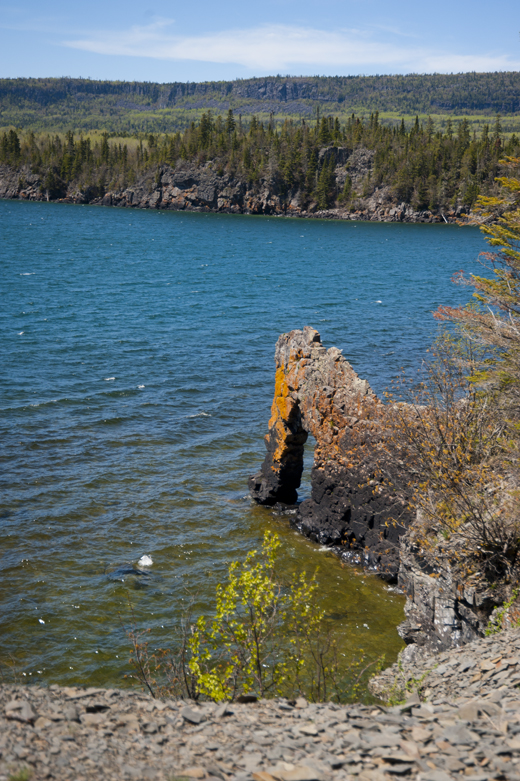 I love the color of the water!  It looks like we are in the Caribbean!  However, it certainly did not feel like it.  The sun was out, but it was still in the 50’s.  On our way out, we drove to the tip of the Islet and did a quick drive through the little town, as shops were not quite open for the season yet. 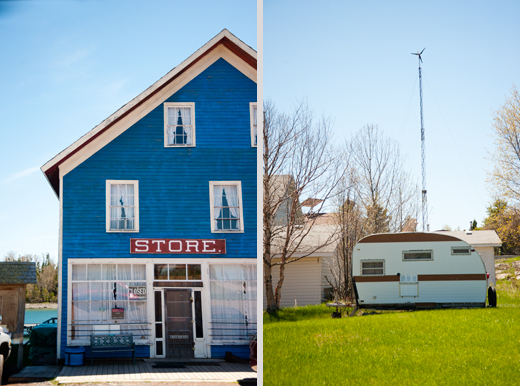 We drove on to visit Ouimet Canyon, where rare plants, normally only seen in the arctic, grow in the shady valley and snow sticks around until late Spring. 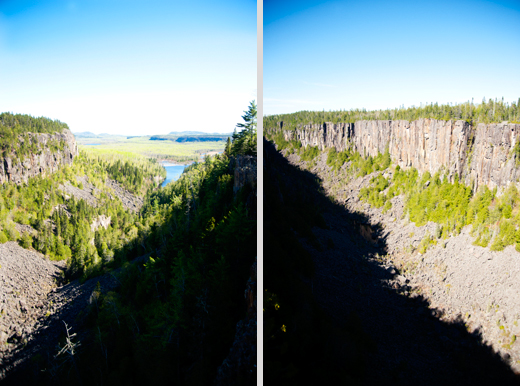 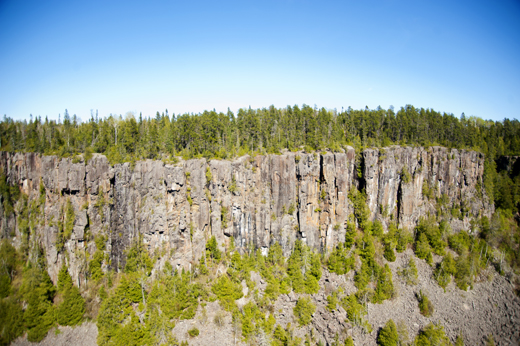 Of course, there are more Legends to go along with these photos:

A long time ago, there was a giant Omett. He helped Nanabijou make mountains and lakes. Omett fell in love with Nanabijou’s daughter Naiomi. One day, Omett was moving a mountain when part of it fell off and killed Naiomi. Omett quickly hid Naiomi. Nanabijou desperately looked for his daughter. When he sensed something underground, he sent a thunderbolt to split open the ground which created a canyon and he discovered his daughter at its bottom. He buried her there and to punish Omett he turned him into stone and put him on the canyon walls to watch Naiomi’s grave forever.

In the photo on the right, you may be able to see the head of the Indian that has been turned to stone.  Use your imagination! 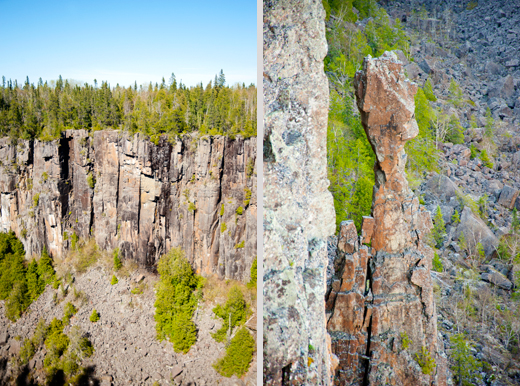 We made our way up and over the Northern most point of the Lake and ended up in the adorable seaside (I mean lakeside, it’s not hard to get confused and think that the lake is the ocean) town of Rossport.  This was one of my favorite towns!  It’s so quaint and peaceful (except for the restless youth cruising through the main street of town) it made me feel like we were in a little New England village.  We stayed and ate at Serendipity Gardens Cafe and Inn.  The little apartments were super cute with their unique cathedral style ceilings. 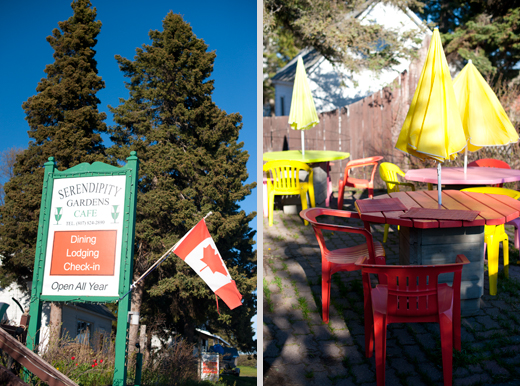 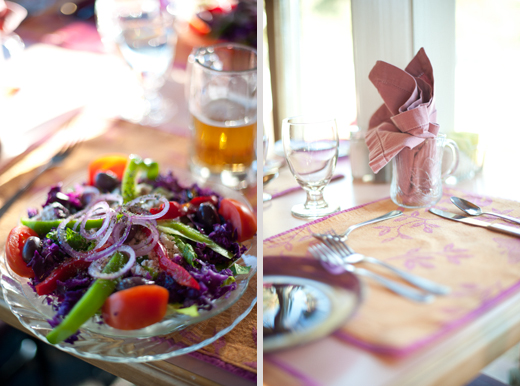 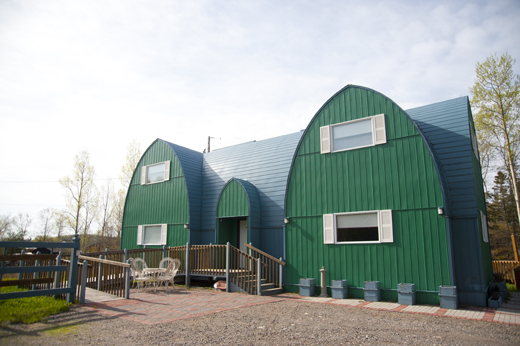 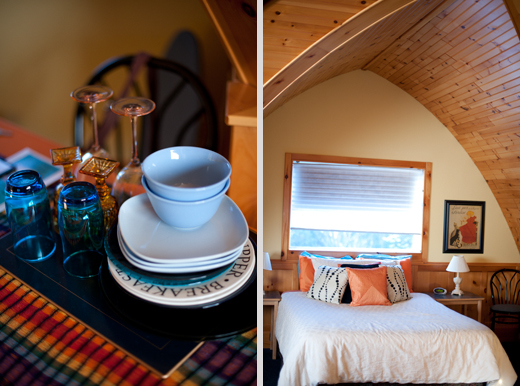 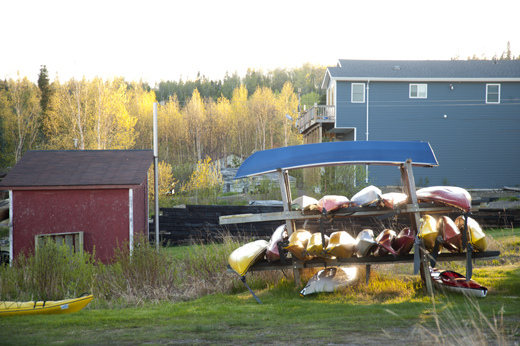 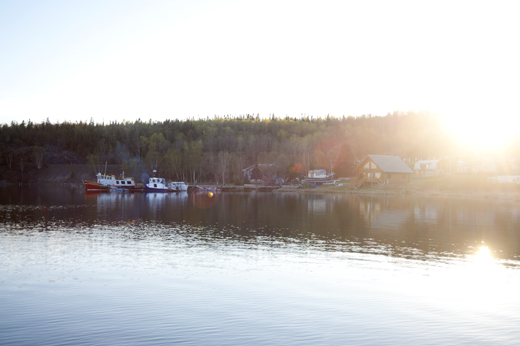 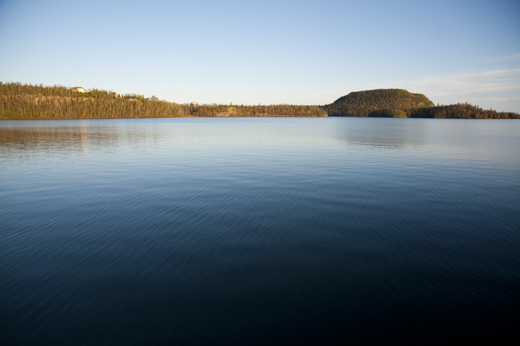 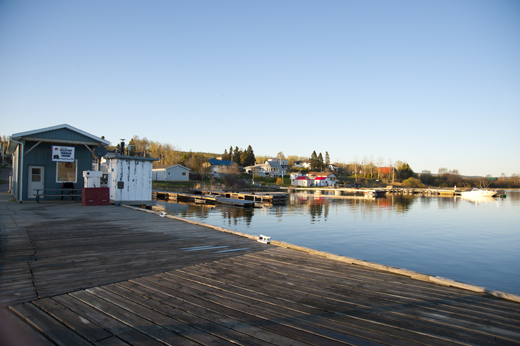 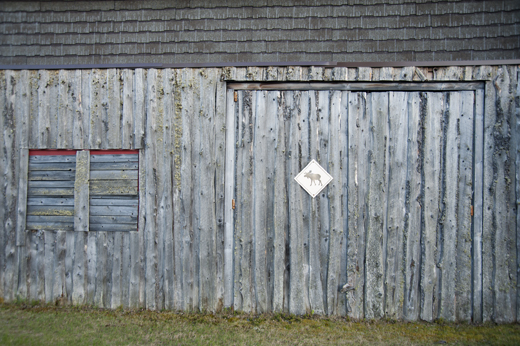 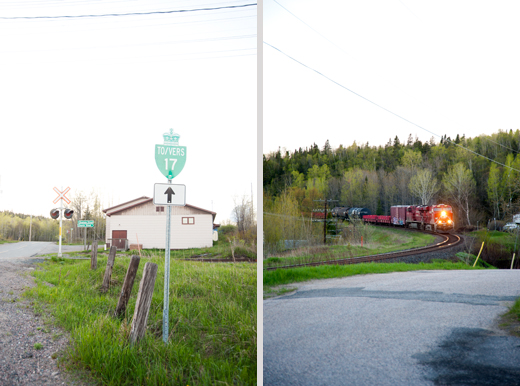 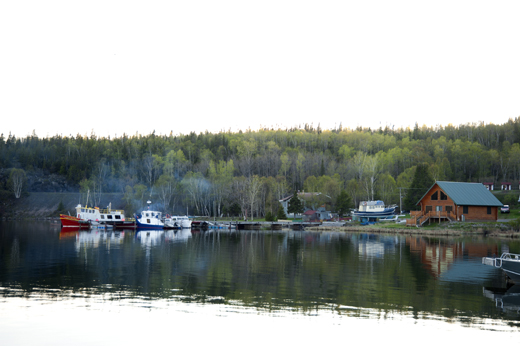 Thank you for the stories. I didn’t know the story behind the name Nanabijou before reading this. The pictures of Ouimet take me back to our trip when you were 2 1/2 years old.