I Love You Francis

My sweet baby Francis, my beautiful, fluffy, bear cat left me for bluer skies on Friday and I can hardly bare it.  I loved him more then anything in the world, I gave him every single little bit...
I
M 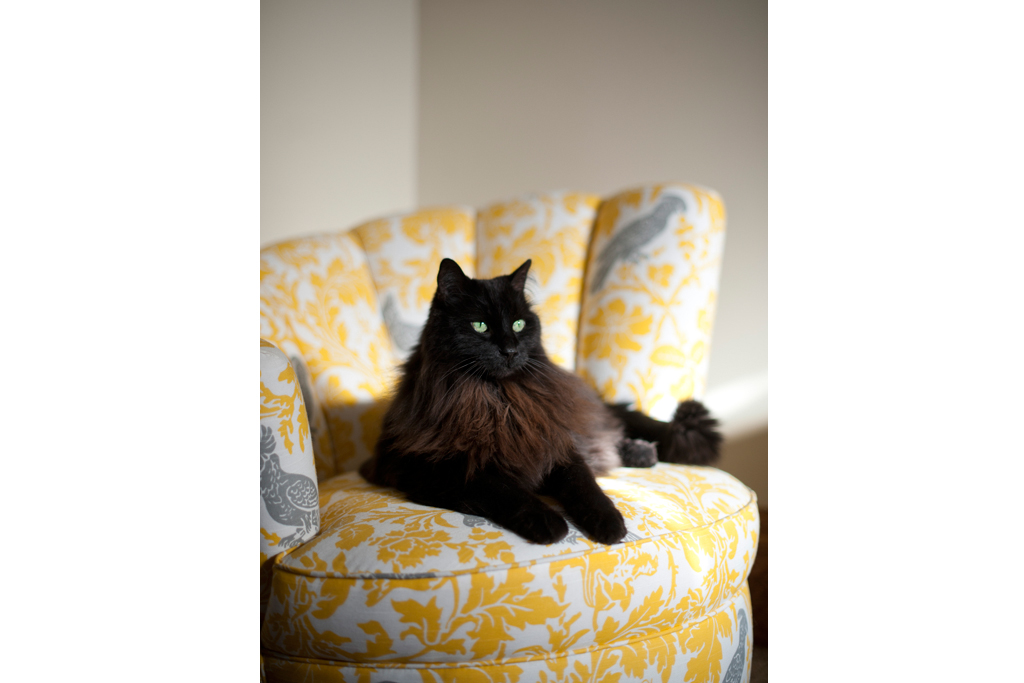 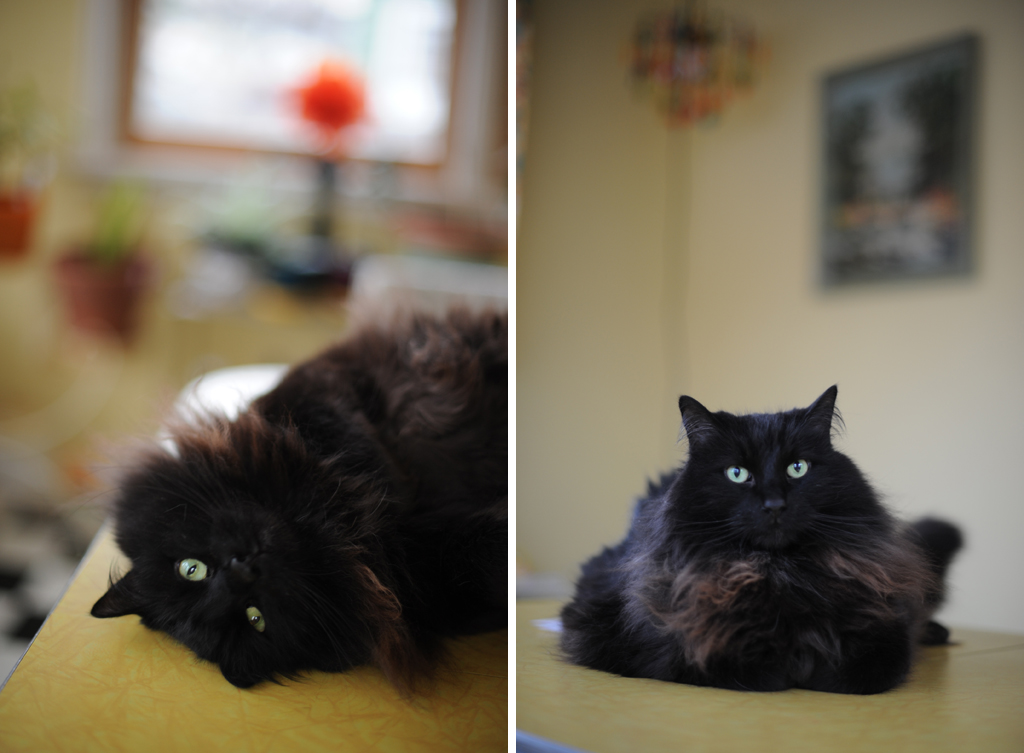 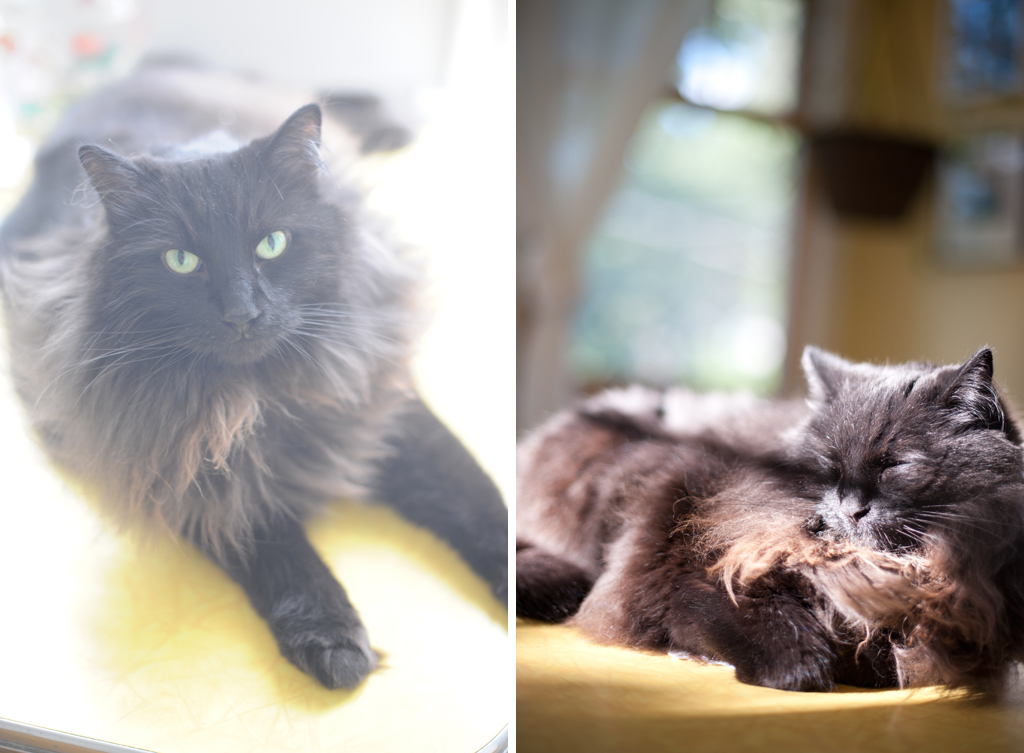 My sweet baby Francis, my beautiful, fluffy, bear cat left me for bluer skies on Friday and I can hardly bare it.  I loved him more then anything in the world, I gave him every single little bit and piece of love that I held in my body.  I gave him my whole heart, and now he is gone, and he took a piece of my heart with him and I will never have it back.  He was 15 and a half years old, and my child, and my best, best friend.  He was with me for half of my 20’s and all of my 30’s and he got to see a lot during that time and he was always there for me when I needed him.  If I was feeling blue or having a good cry, he would come and sit by me, and purr and put his paw on my knee and he would make sure that I was okay.  Francis was so beautiful and playful and sweet and everyone that met him fell in love with him.

I sat with him on Friday at the doctors for hours as he lay on the table with fluids pumping into him in hopes of some improvement, but he was just too week.  I held his paw and combed out his fur and rubbed his head.  Then, towards the end of the day, he ever so slightly lifted his leg for one last chest scratch, which Tim and I gave to him before we took him off of the fluids.  And then it was time, and I held him one last time and I was the last face that he saw, and then he just laid his head down, and it was over.

My heart hurts so immensely. 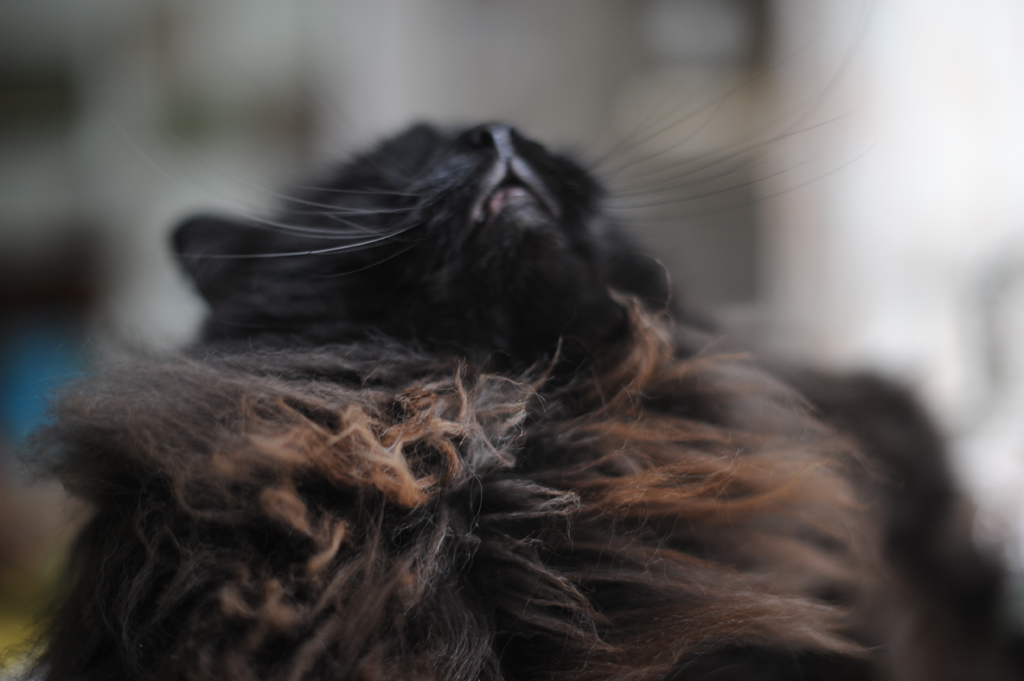 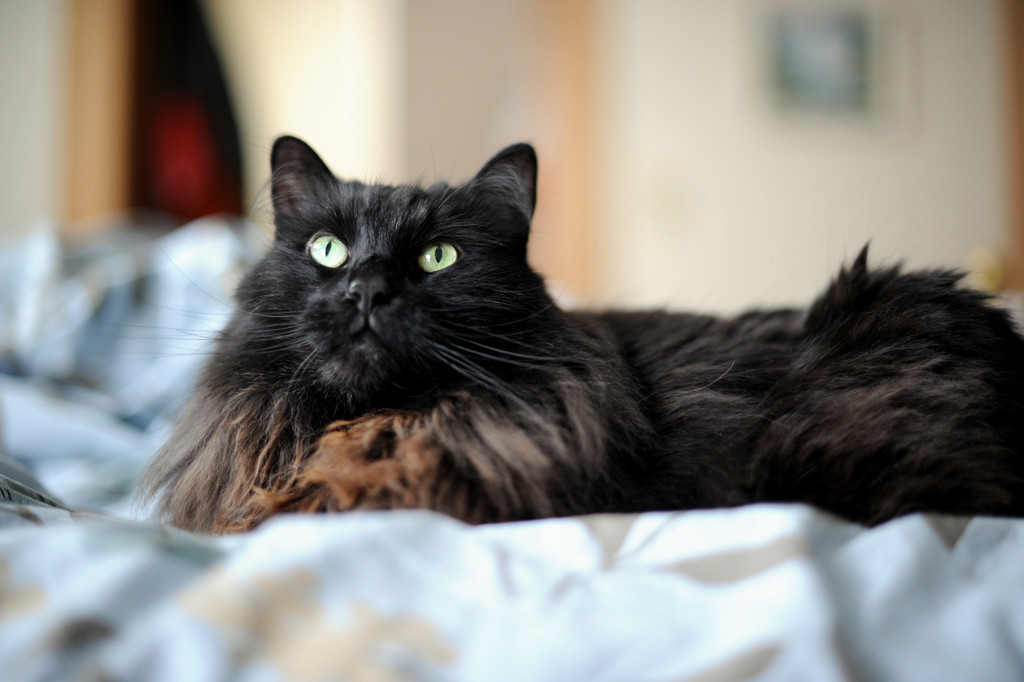 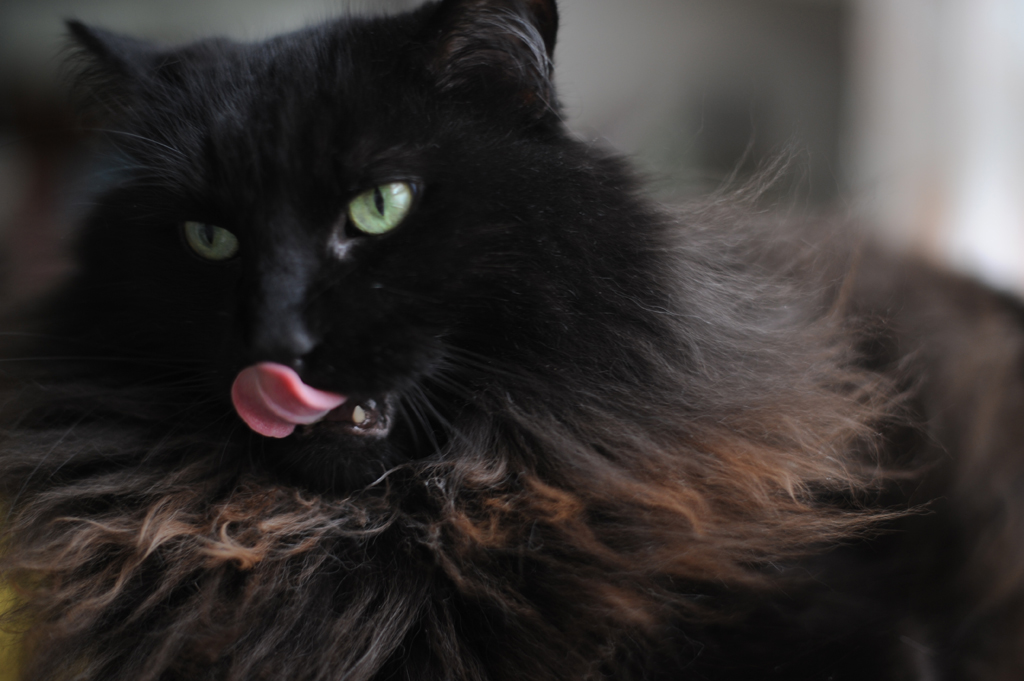 When he was just a kitten and could almost fit in the palm of my hand, he gave me my first scare.  He almost caused me to miss my graduation ceremony at MCAD.  I was getting ready to leave my apartment to go to the ceremony but I couldn’t find him and I thought he had somehow gotten outside and I was freaking out.  I even called the humane society to see if anyone had turned in a small black kitten.  I looked over the apartment so many times, I swear I did.  And it was a small apartment.  Finally I remembered the tear in my bed spring box and when I pulled the fabric open, there he was, a little black puff ball curled up inside my bed springs!

One day I was really sick in bed and I could barely move.  My bedroom was really small and the door was right next to my bed so I could just roll over and open the door.  Somehow during the night, the door had been closed and Francis was scratching to get out.  I simply could not bring myself to roll over and open the door.  So, Francis, still a little tiny puff ball kitten sat on my chest and peed.  I guess I deserved it!

There was the time when Francis learned about candles.  I had a candle burning in my apartment and I had to go downstairs to do laundry.  I was only away for a few moments, but when I came back I noticed it smelled like burnt hair.  That was when I saw Francis with his face inches away from the burning candle and his whiskers singed off!  He learned his lesson.

The night my other cat Sigmond passed away, I was crying so hard in my bed, trying to fall asleep.  Then I felt Francis jump up onto the bed and he came and plopped his big fluffiness right down next to me and purred as loud as he could.  Ever since then he always slept next to me with his head on my pillow.

Francis gave us another scare once when we were moving from one apartment to another.  We had practically the entire apartment emptied of everything, when we realized that Francis was missing.  I of course started freaking out again.  I had Tim and my dad out in the neighborhood calling for him, but no one could find him.  We went back into the apartment and all that was left was a random pile of junk in the closet.  As I began to lift things away from the pile, who do you think I saw.  Franny’s little green eyes peered up at me.  I wanted to scold him of course, but he was just scared so I reached down and grabbed him and held him close to me.

Francis also loved to play fetch with his sparkle ball toys!  I would throw the ball and he would chase after it and bring it back to me!  He also liked to carry the ball around in his mouth and play with it himself sometimes.

He also loved what we called “couch time” where he would snuggle with us when we watched movies.

Francis was an indoor cat, but we liked to let him sit on the front porch sometimes.  One day there was a light, warm rain coming down and he just sat at the edge of the porch with us, just out of reach from the rain.  It was really pleasant and I think he really enjoyed it. 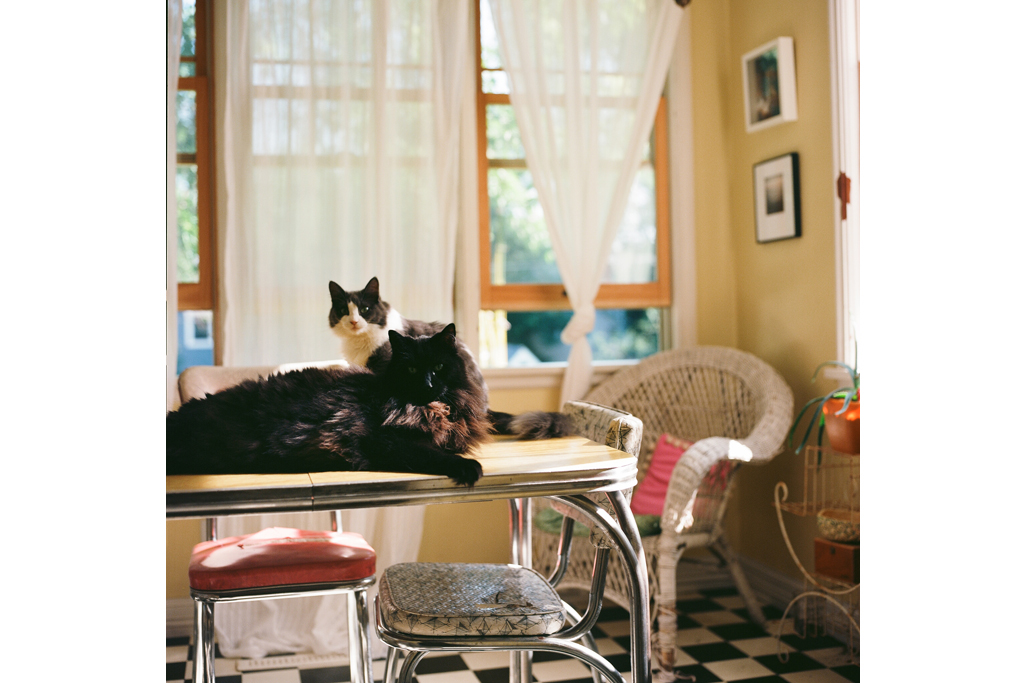 He was a very happy cat.

I can’t believe he is gone.

Things will not be the same without him.

I LOVE you Francis.

Thank you for being a part of my life. 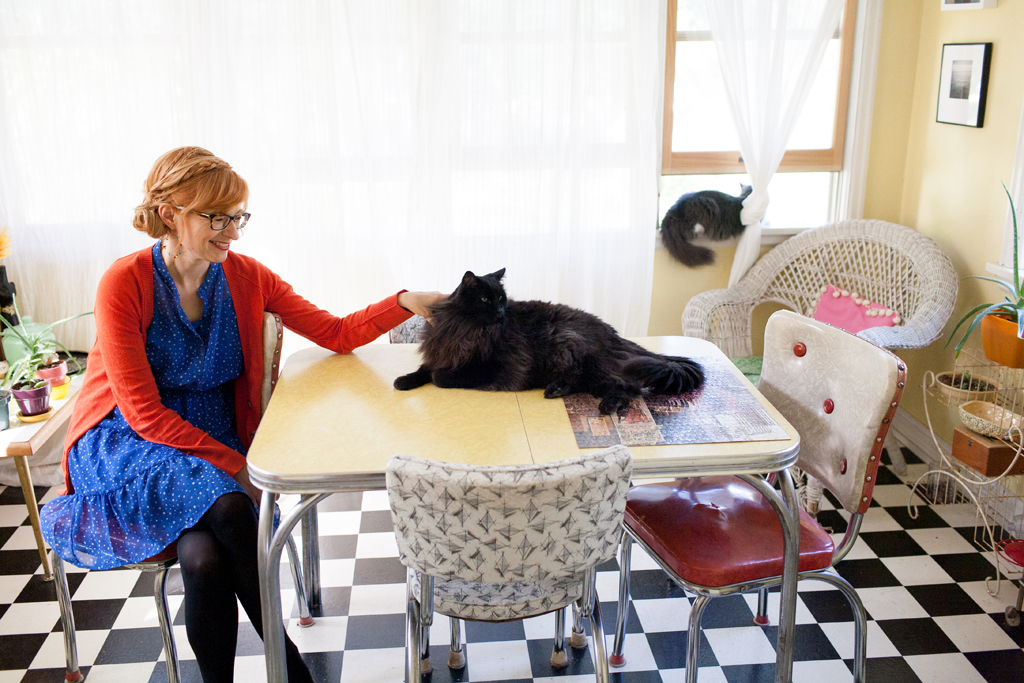 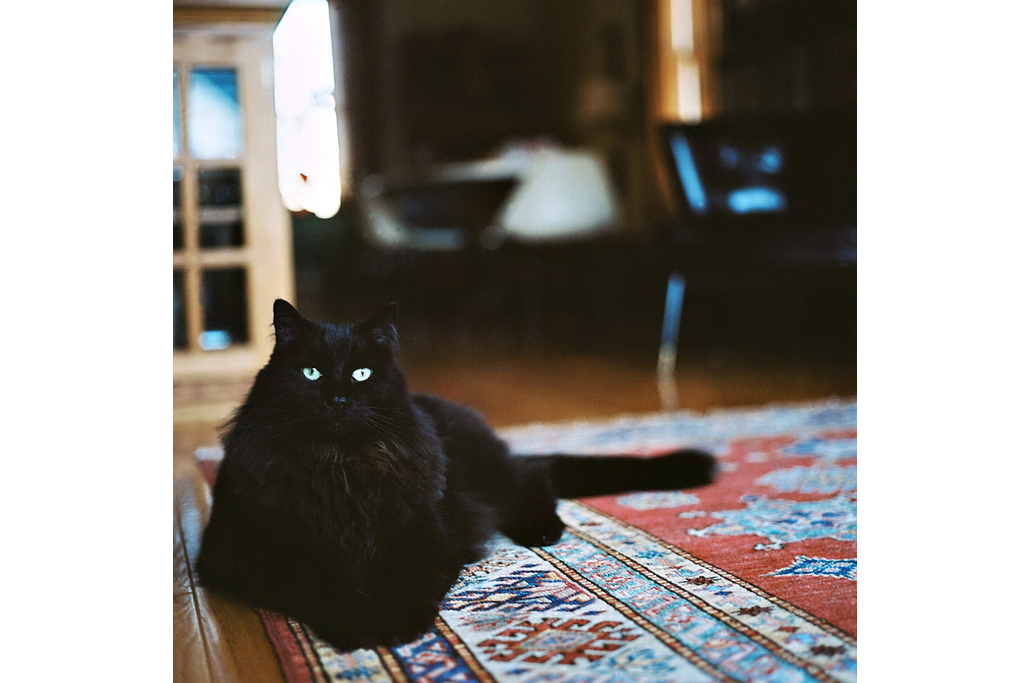